Execution context in JavaScript for beginners 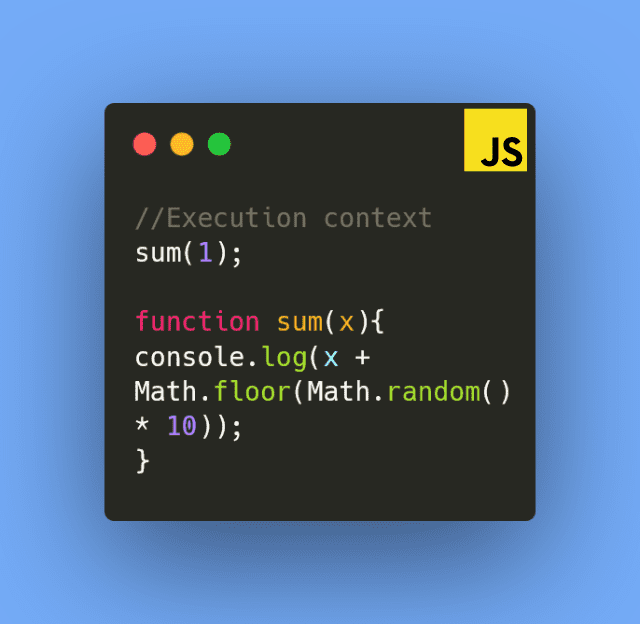 Let’s discuss these starting with the creation phases.

1.  An activation object is setup: Memory is set up in the activation object. This is a
special object which contains all the variables defined within the function, the
arguments object for the function, function arguments and any inner functions
declaration inside the main function
2.  Scope chain is created: The scope chain is a list of all the variables within the
function. This also includes all the variables in the global scope. It forms a
connection to the outer environment.
3.  Create a this context: The value of this is initialized after the creation of the scope
chain
Hoisting is an important part of the creation phase. During the creation phase memory is
setup for all variable and function declarations to be saved. Therefore, before execution the JavaScript engine already has a reference to variable and function declarations. This is how you have access to variables before they are declared. For example:

The variables are initialized in memory with a default value of undefined during the
creation phase. This is why you are able to access a before its declaration. Variables
declared with let and const are not assigned any initial values and trying to access them
before declaration results in a ReferenceError:

The entire body of function sum(x) is available before it is declared. Now moving on let’s
briefly discuss the execution phase of the function execution context.

During this phase, code is parsed line by line by the interpreter. The variable object is
updated with the values assigned to the variable by a user. And function calls are executed. If a new function call is encountered, it will stop executing the current function and the creation of a new execution context for that function will begin. A new outer reference to the immediate execution context will be setup.