Hoisting in JavaScript – a complete guide 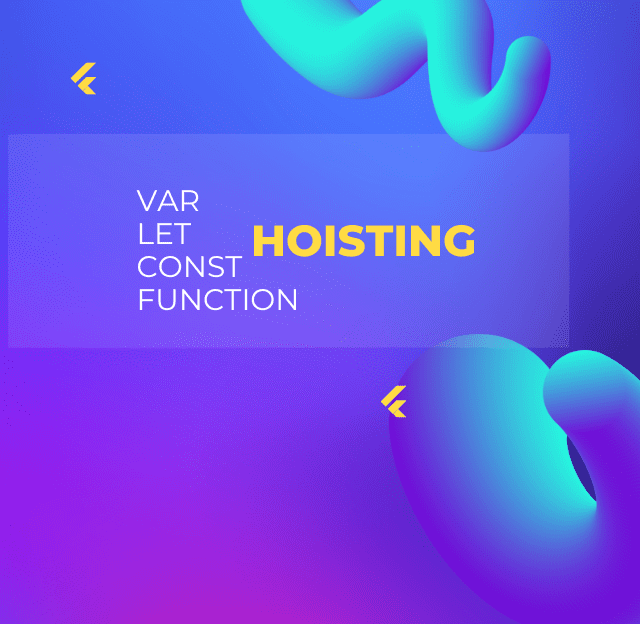 Let’s delve into hoisting in JavaScript! During compilation, microseconds before code is executed, variable and function declarations are “hoisted” i.e. they are added to memory inside a data structure called “lexical environment”. The official ES6 documentation describes the lexical environment as:

“Lexical Environment is a specification type used to define the association of Identifiers to specific variables and functions based upon the lexical nesting structure of ECMAScript code.”

Conceptually, this refers to a data structure containing variable and function declarations that are initialized with pre-defined values:

Code gets executed during runtime, which means all declarations, assignments, and function calls will be executed then. We’ll explore hoisting in reference to var, let, const and function declarations in the following sections. This will make the concept clearer.

Only declarations get hoisted, not initializations or assignments

To understand variable hoisting better, here is a small summary of the variable declaration, initialization and assignment phases. This is commonly known as “making a variable”.

During declaration, variables are automatically assigned a value of undefined. This is called initialization:

And this brings us to the next point, how are var variables hoisted in memory?

var variables are hoisted in memory with a starting value of undefined. For example:

Conceptually, it will be stored in memory like so:

Therefore, which is whjy when you try and access a var variable before its declaration, the undefined type is returned:

undefined is logged to the console.  The following bullet points will explain why:

The above bullet points can be demonstrated in code format as:

After hoisting, during execution, the value of var variable will be overwritten with the value assigned by a user

let and const are stored as uninitialized values, in contrast to var which is stored as undefined.  As an example:

These will be stored as uninitialized:

Trying to reference a let or const variable before its declaration will result in a ReferenceError getting thrown:

Like var, let and const variables are hoisted. However, unlike var, they cannot be accessed before they are declared.  This is because they lie inside the Temporal Dead Zone (TDZ).

let and const variables are said to lie within the Temporal Dead Zone when they’re declared, but not as yet initialized in memory. These variables get hoisted, but no value is assigned to them in memory, not even undefined.

Functions are hoisted along with a reference to the body of the entire function. For example, take a function called myFunc():

The myFunc() function will be stored in memory during compilation like so:

The function will execute before its declaration and the following will be logged to the console:

Having understood the hoisting mechanism for var, let, const and function declarations. Let’s examine the precedence order for these.

Precedence for variable and function hoisting

The order of precedence for hoisting is:

Variable assignment takes precedence over function declaration during hoisting. Hence, the statement typeof(fruit) will log “string” to the console.

Moving on, function declarations takes precedence over variable declarations, as we can see from the example below:

The typeof operator takes fruit as an argument as returns “function” due to function declaration taking precedence over variable assignment during hoisting.

An important point to keep in mind is that let and const cannot be re-declared in the same scope. Let’s refactor the above statement to use let instead of var:

You cannot re-declare let variables in the same scope, therefore, a syntaxError is returned:

This demonstrates one of the advantages of using let and const over var.

While writing bug free code that can be used in production is the ultimate goal, errors can arise on the way due to quirks such as hoisting. Learning to handle errors effectively will greatly increase your productivity as a developer.